Colours in the clouds 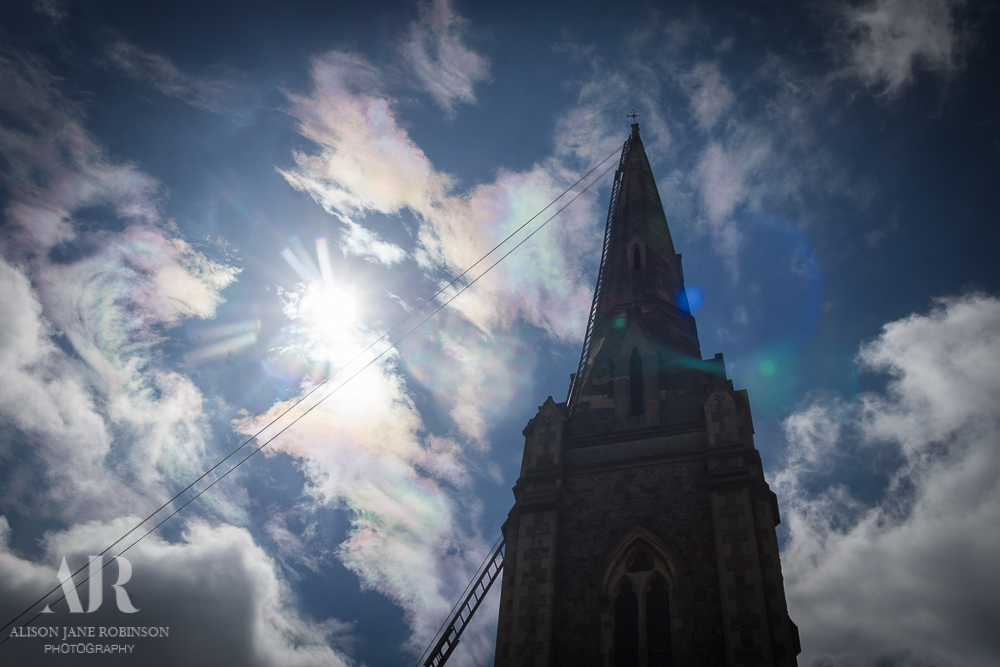 While watching some men climbing the steeple of the URC church in Colchester’s Red Lion Precinct I noticed the sun shining through some ice crystals in the clouds to create some beautiful colours. 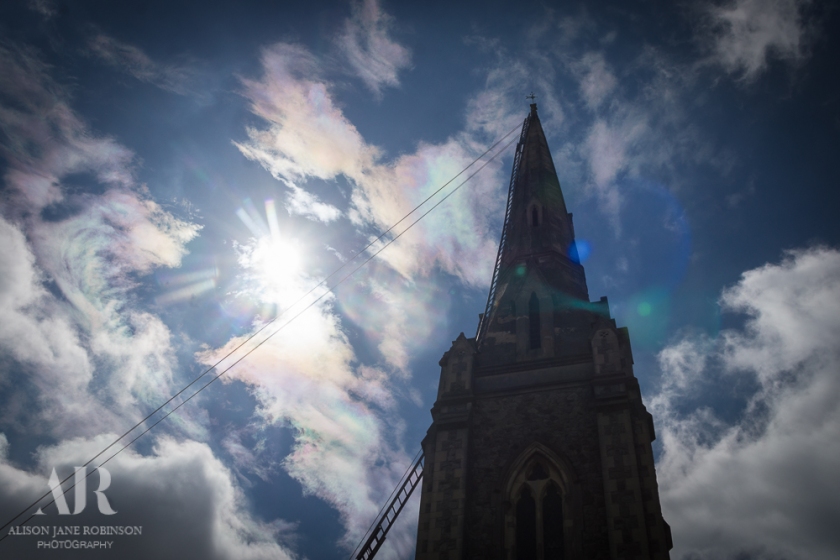 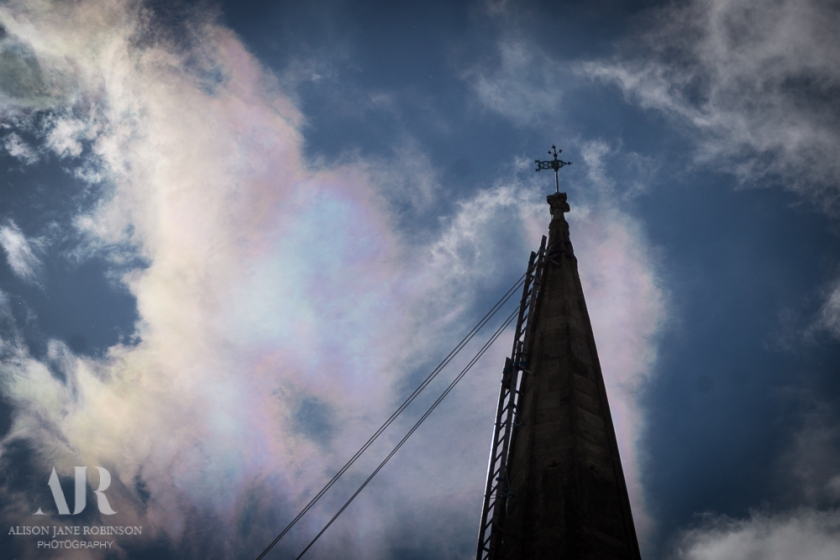 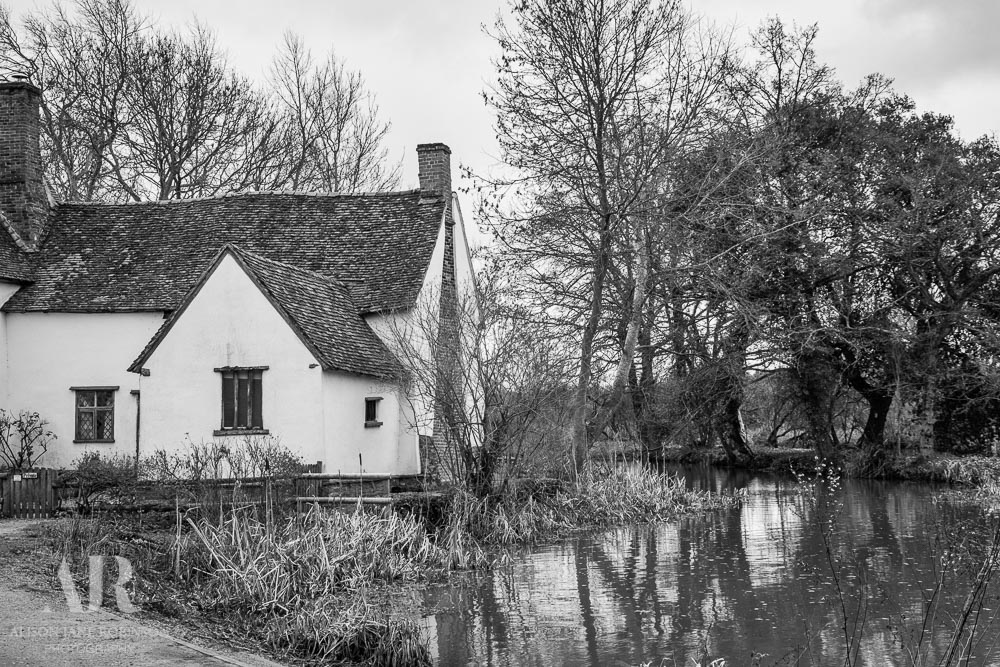 After a week of terrible weather in Essex I was beginning to think I wouldn’t be able to get my camera out at all. Thankfully in the morning of the last day I was there the sun came out briefly and I dashed over to Dedham.

Although it was sunny it was bitterly cold, very windy and a weekday so I knew there would be few, if any, walkers or tourists around for me to include in the photos to give a modern day feel to them so I treated my time at Flatford as another test for some panoramas.

I started by setting my tripod up in front of the Haywain scene. My mind really wasn’t on what I was doing and it took a few sweeps of my camera before I was able to focus and count the number of photos I was taking for each panorama. At one point I was completely distracted by a fat Robin who hopped out of the hedge I was standing in front of and started scrabbling around my feet and turning over the dirt I had moved when setting up my tripod.

I eventually tried a couple of different focal lengths and two lenses but this panorama of three rows of eight photographs is my preferred.

Back on the laptop I used Photoshop to merge a copy of Constable’s Haywain on top of my photograph and reduced the opacity so that some of the photograph is still visible beneath.

The painting image that I have used is very low resolution and cannot be used for printing but on a screen I think it gives a really good illustration of how the landscape has and hasn’t changed.

I moved on to the scene of Constable’s Boat Building. By now I was in full swing and only needed to try a couple of different focal lengths in order to get what I wanted. In the end, this one of three rows of nine photographs is the one I prefer although I haven’t quite approached it from the right angle. I don’t have a decent copy of Constable’s Boat Building but from the images I have seen in the books I think I need to stand about a foot or two to the left to get it perfectly right.

Finally I moved on to the scene of Constable’s Flatford Mill. Again I only needed to try a couple of versions before I was satisfied. This version has three rows of eight photographs.

As with The Haywain I used Photoshop to overlay a copy of the painting onto the photograph. I think the Stour changed route slightly when a new lock was installed in 1838, just over 60 years after Constable was born, and this is why the towpaths are going at such different angles.

I chose to only take three of the scenes on this occasion, I wanted to know that I was getting these right before I moved on to take any more.

I think I will include a copy of the original painting overlayed on my photograph. I want it to be blended in well and a low 30% or 40% opacity so that viewers can see both the painting and the detail in the photograph below. I think this will give the painting context in the wider scene. Then if I keep the photograph black and white and the painting in colour, it should create a nice effect and add to the timeless nature of the countryside.

I have also decided to only use my digital camera for this project. I will ‘play’ further with the Rangefinder but I am pleased with the results of the digital panoramas and will stick with them.

I’ve included a gallery of all of the above images so that they can be viewed larger and in more detail. 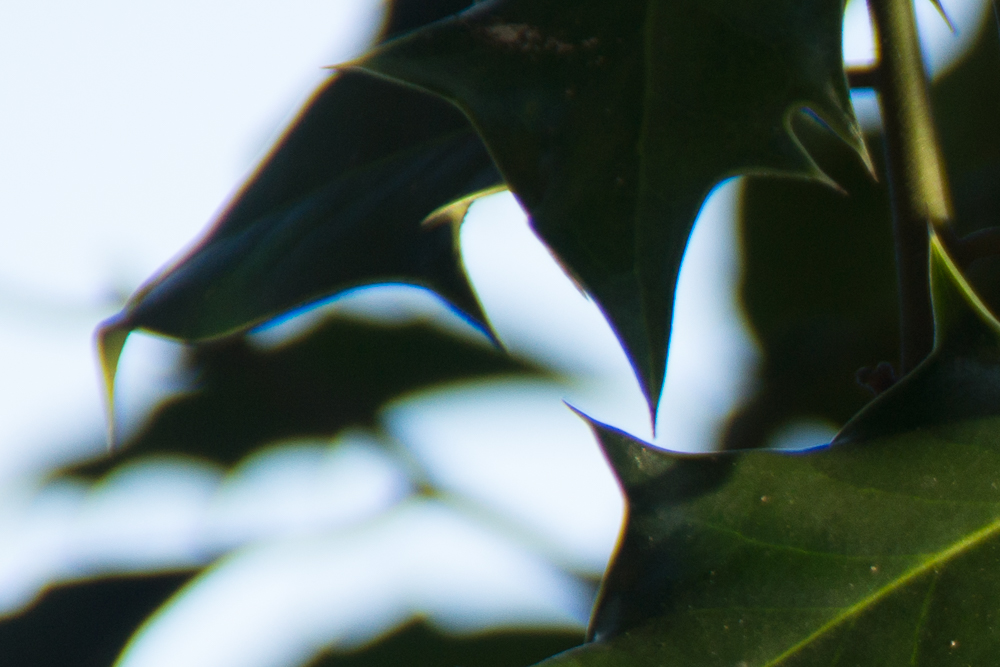 For the final part of our Know Your Camera assignment we looked at chromatic aberration.

Chromatic aberration is also sometimes known as colour fringing and is the result of light rays not meeting at one focal point, due to limitations and defects in the lens. Light is defracted by different amounts depending on its colour and is accentuated when it hits a positive or convex lens. It can be countered by having a negative or convex lens close to the positive lens but the more glass within a lens makes it heavier, more expensive and more complicated to make.

I took this photograph of holly  in the garden and at this size it looks like a perfectly ok photograph. But, on closer inspection, particularly where the dark leaves are next to the bright blue sky, you can see a blue line around some edges of the leaves and a purple line around other edges.

This could have been corrected by stopping down the lens and is also much more obvious on wide aperture prime lenses.

Chromatic aberration can be corrected in Lightroom using the defringe sliders.