For our Truth Assignment we have been exploring photographic truth and what makes an image truthful or not. There are many differing opinions and some critics even suggest that truth is simply an illusion.

I chose a simple pair of egg cups and attempted to photograph them truthfully. 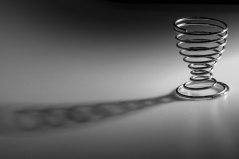 I guess that the last photograph is the most truthful and most honest. In all of the photographs I have shown the texture and shape of the egg cups but in each of the other images I have obscured part of them and not allowed the viewer to see the full picture.

I have photographed the egg cups from unusual angles and in the third image, unless you have been told that they are egg cups you may not even realise that that is what they are.

There is no scale in the photographs either so unless you already have an understanding what an egg cup is you have no idea of how big or small the object is.

In all of the images though I have selected the lighting, the ISO that I shoot at and the shutter speed and aperture. The very fact that I have selected to photograph these in the studio and not in their natural habitat of the kitchen cupboard means that my opinions and my ideas have caused me to represent the truth in a particular way, a way that is personal to me. I guess the question is, is my truth the same as someone else’s?