A couple of weeks ago we had a visiting speaker at college, called Robyn Woolston, who said that what you throw away says a lot about you. I thought the things I throw away would make an interesting subject for my contemporary Vanitas image.

I chose a wicker wastepaper basket and pulled a few things out of it to see what it might say about me. Food wrappers, tablet foils, hair products, magazines, train tickets and more tells you about my lifestyle, where I’ve been, how healthy I am, what my interests are and what I value. Its a little worrying to think that someone can work out so much about me from the things I simply toss in the bin.

I planned to photograph them in the studio and make it look similar in style to a traditional Vanitas painting, using strong triangular shapes and trying to replicate window light, using one light from the side with another to light the background. 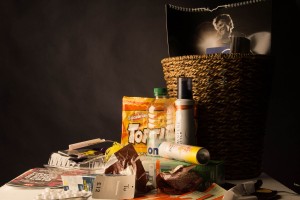 I spent some time getting the composition how I wanted it. At first the big crisp packet dominated the image but looked much better when I folded it down and under the bin.

The first image was taken using the flash and looks fine. I’m happy with the way your eye is drawn in and around the image but as we had not used flash for the traditional version we did last week I tried this one without a flash too.

As suggested, the light is much softer and gives it a much gentler and more solemn tone. This is probably my preferred image.

For the third image I moved the light at the side to the back slightly and turned it to face towards the front a little. It gives the image a bit more texture but is far too dark for my liking.

This has given me an idea to create further images on this theme about people that I know.