For the A Dangerous Place part of the Interpretations assignment I arranged to go out with the Street Pastors in Scunthorpe for a couple of hours.

It was a great experience but proved to be quite tricky to photograph. The uniforms have fluorescent branding on them which would blow out if I used a flash and the speed at which situations changed meant that I would need to hand hold the camera and use a very high ISO to keep images sharp. I also wouldn’t have time to set my camera manually for each shot.

Although the streets were quiet on this occasion I was aware that trouble could start and escalate suddenly and the presence of a camera may exasperate any situation. I was also aware that any person who needed the Street Pastor services would also be considered to be vulnerable and probably wouldn’t want to be photographed so I used my camera with discretion throughout and asked for permission to take photos whenever I could.

There were no troubled incidents while we were out on the streets this time, but the Street Pastors made several rounds of the town centre, collecting bottles that had been left in the street and that could have been used as weapons later in the evening, sweeping up broken glass so that no one can fall on it, or walk on it in bare feet. I watched as they spoke with each of the door staff to get the lowdown on what was happening around the town and checked in with the Nite Safe team – trained door staff, not attached to any one premises, who have additional training and additional powers.

The Street Pastors did find someone who was unwell, possibly suffering from an angina attack and whom they cared for until an ambulance arrived. 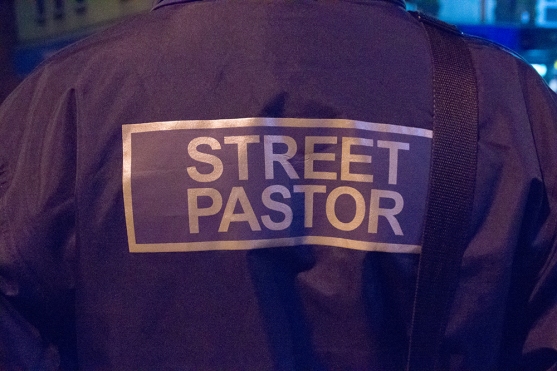 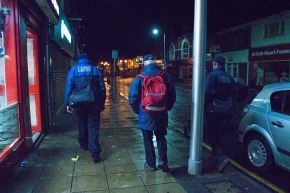 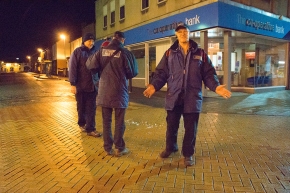 I had planned to get some documentary style photographs of the Street Pastors and the work they do and thought they would probably look best in black and white to give a more reportage feel to them, but I quite like the night time colours and, in the end, have decided to leave them in colour.